The Rolex Cosmograph Daytona, introduced in 1963, was designed to meet the demands of professional racing drivers. With its highly reliable chronograph and bezel with tachymetric scale, it allows drivers to perfectly measure average speeds up to 400 kilometres or miles per hour, as they choose. An icon eternally joined in name and function to the high‑performance world of motor sport.

Daytona is the name of a Florida city which, at the beginning of last century, started attracting motorsport enthusiasts for its wide beach of smooth, compacted sand, ideal for land speed record attempts. 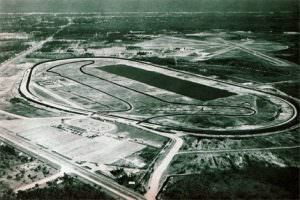 Since the 1930s Rolex had started to build a strong reputation as a manufacturer of versatile sports watches thanks to its ‘sealed against the elements’ Oyster case and famous testimonials like Sir Malcom Campbell, which can be somehow considered the first Ambassador of the brand.

In those years, Rolex produced its first chronograph wristwatch with a single push buttons on the side to start, stop and reset a separate second hand. For these chronograph models Rolex adopted movements from the company Valjoux.

But it was in 1955 that Rolex introduced a manual-wind chronograph in an oyster case which can be considered a precursor of the Daytona. 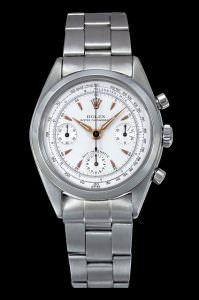 The Rolex Oyster Chronograph reference 6234 featured a tachometer scale on the outer ring and a telemeter scale for distances on the inner ring. From 1955 to 1961, Rolex produced about 2300 stainless steel pieces and less than 150 in 14k or 18k gold in a variety of black and white dials. The three sub dials (small seconds at 9 o’clock, 30 minutes and 12 hours counters respectively at 3 and 6 o’clock) had different sizes in the various versions.

But the real father of the Daytona is the reference 6238, in particular the second series which is called Pre-Daytona by collectors.

The telemeter scale was removed while the tachometer scale was still on the dial. The bezel was smooth and polished with a case diameter of 37 mm. The Valjoux cailbre 72 chronograph movement was customised by Rolex and renamed 72 B, then 722 in the years 1965-1967. 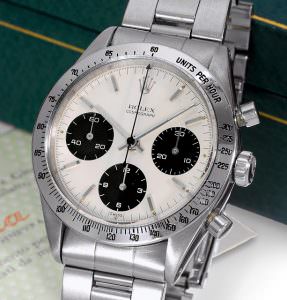 In 1963 Rolex introduced the first Cosmograph model, the reference 6239, without replacing reference 6238 which remained in production until 1967. The distinctive characteristic of reference 6239 was the tachometer scale engraved on the metal bezel to enhance the legibility of the dial, available in black with silver counters or in silver with black counters. In the first years of production the bezel was graduated up to 300 units per hour to change later to 200 units per hour.

This Rolex Chronograph was not immediately referred to as the Daytona. In fact, initially Rolex used the name Le Mans in some advertisements before finally opting for the Daytona legendary name.

In 1965 the Daytona name finally appeared also on the dial.

Since then the Daytona has become what it is today, a beautifully refined and robust timepiece, one of the most highly desirable watches in the world. Over the years endless improvements have been made to every aspect of the watch and there are countless variations available.

Its dial carries in red letters the name “Daytona” – the most famous motor racing circuit in the United States. Available in 904L steel, 18 ct gold, Rolesor and platinum versions with a variety of dials, robust Oyster bracelets as well as elegant leather straps both equipped with high security Oysterlock clasps.

Here’s everything you need to know on the current Daytona. 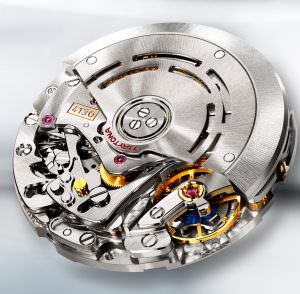 The Cosmograph Daytona is equipped with calibre 4130, a self-winding mechanical chronograph movement entirely developed and manufactured by Rolex. Its architecture incorporates far fewer components than a standard chronograph, thereby enhancing the movement’s reliability. Like all Rolex Perpetual movements, the 4130 is a certified Swiss chronometer, a designation reserved for high-precision watches that have successfully passed the Swiss Official Chronometer Testing Institute (COSC) tests. The chronograph movement features a Parachrom hairspring, offering greater resistance to shocks and to temperature variations. 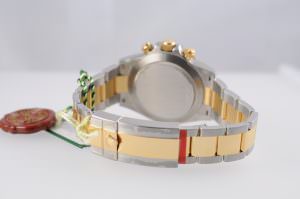 The design, development and production of Rolex bracelets and clasps, as well as the stringent tests they face, involve advanced high technology. And, as with all the components of the watch, aesthetic controls by the human eye guarantee impeccable beauty. The Oyster bracelet is a perfect alchemy of form and function. First introduced in the late 1930s, this particularly robust and comfortable metal bracelet with its broad, flat three-piece links remains the most universal bracelet in the Oyster collection. 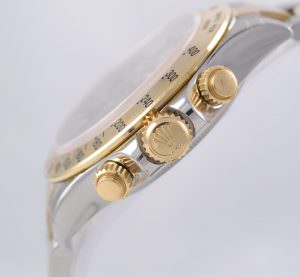 At Rolex, form and function work in harmony. The Daytona’s chronograph functions are activated by pushers that screw down like the winding crown when they are not in use, guaranteeing it is waterproof to 100 metres. One press to start, stop or reset the chronograph produces a crisp, clear click that was perfected using the most advanced technology. Rolex watchmakers also perfected the mechanism to suit the ideal finger pressure on the pushers, and engineered it to provide an instantaneous and accurate start to the timing without sacrificing reliability

The Cosmograph Daytona is covered by the Superlative Chronometer certification redefined by Rolex in 2015. This exclusive designation testifies that the watch has successfully undergone a series of tests conducted by Rolex in its own laboratories according to its own criteria, which exceed watchmaking norms and standards. The certification applies to the fully assembled watch, after casing the movement, guaranteeing its superlative performance on the wrist in terms of precision, power reserve, waterproofness and self-winding. The precision of a Rolex Superlative Chronometer after casing is of the order of −2/+2 seconds per day, or more than twice that required of an official chronometer. The Superlative Chronometer status is symbolized by the green seal that comes with every Rolex watch and is coupled with an international five-year guarantee

Fifty years after its creation, the Cosmograph Daytona remains in a class of its own among sport chronographs and continues to evolve. It is the first Oyster model in the Professional range to be offered in platinum, the noblest of precious metals, fitted for the occasion with an ice blue dial, exclusive to Rolex platinum models. It is also equipped with a spectacular monobloc Cerachrom bezel, an exclusive Rolex innovation with exceptional resistance properties and incomparable aesthetics. 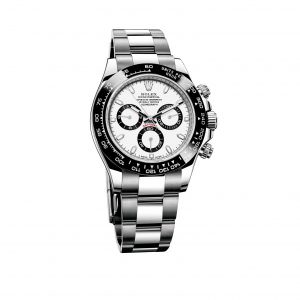 The new monobloc Cerachrom bezel in high-tech ceramic offers a number of advantages: it is corrosion resistant, virtually scratchproof and the colour is unaffected by UV rays. This extremely durable bezel also offers an exceptionally legible tachymetric scale, thanks to the deposition of a thin layer of platinum in the numerals and graduation via a PVD (Physical Vapour Deposition) process. The monobloc Cerachrom bezel is made in a single piece and holds the crystal firmly in place on the middle case, ensuring waterproofness.

The new Cosmograph Daytona is fitted with an Oysterflex bracelet on certain models, developed and patented by Rolex. At its core lies a superelastic metal blade overmoulded with high-performance black elastomer, a material that is particularly resistant to environmental effects and very durable. The Oysterflex bracelet is also fitted with an Oysterlock safety clasp and is equipped with the Rolex patented Easylink rapid extension system that allows the wearer to increase the bracelet length by approximately 5 mm, for additional comfort in any circumstance.

Here at Edinburgh Watch Company the Rolex Daytona is one of our most popular selling models, we currently have two very stunning examples in stock. One unworn 2018, finished in 18ct Gold and stainless steel with a black dial and the other is also an unworn 2018 model finished in 18ct gold and 904L grade stainless steel, however with a white dial. If you are looking for something in particular that we don’t have in stock, please don’t hesitate to get in touch as we will also do our best to help you source the Daytona of your dreams. 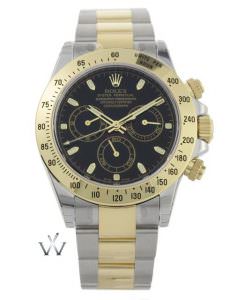 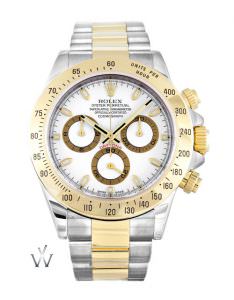 For more information on any of these watches please don’t hesitate to get in touch.

The History of the Rolex Sea-Dweller

ROLEX AND THE WORLD OF MOTORSPORTS