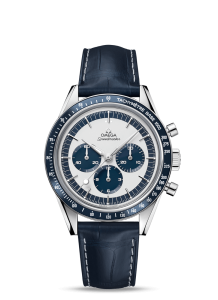 Tribute watches are becoming increasingly popular with luxury watch makers these days (and have been for some time). As collectors become more and more educated about vintage watches, watchmakers are trying to woo them with modern interpretations of the watches they know and love.

These watches can be a massive success, capturing the spirit of the original with modernised and refined parts, however sometimes it can go the other way. In this case it hasn’t, the new Omega Speedmaster CK2998 is in our opinion here at Edinburgh Watch Company a fantastic watch.

It closely resembles the original classic model with its striking use of blue. The blue flows across the watch firstly with it’s ceramic bezel, the three sundials that contrast on the opaline dial and then the blue strap.This watch is limited to only 2998 pieces and is now sold out.

Reissues of classic Speedmasters are nothing new for Omega. From the Speedmaster ’57 with its broad arrow hand and steel bezel to the First Omega in Space that commemorates a 1962 trip to orbit, the company isn’t hesitant about paying homage to its history. Most of the time though, Omega does a good job – not an easy task when dealing with a watch as beloved as the Speedmaster, not to mention how detail-orientated collectors get when it comes to vintage models.

This Omega CK2998 limited edition is inspired by the original 1959 Speedmaster ref. 2998, the archetype for the Speedmaster as most of us know it. It was the first model to feature the black bezel commonly associated with this watch (previously the bezel was steel) and the little dial details, hand shapes, and case profile all make it a benchmark in the Speedmaster’s history.

It’s the detail Omega have gone into that makes this such a successful tribute watch. Look closely at the tachymeter bezel and you’ll see that it reads “Base 1000” at the top right. This is straight off the 2998-1 bezel, with later bezels starting at 500 instead. It would have been easy to miss this, however Omega we’re very keen to get this model right.

The alpha-shaped hour and minute hands are accompanied by a bold “lollipop” seconds hand, with the large luminous dot at the tip. This is yet another flourish of the original watch that was important to get right (it’s worth noting that the very first 2998-1 had a slim, straight seconds hand, even if that’s not the version most coveted today).

Then there’s the movement inside: a caliber 1861 manually-wound chronograph. The 1861 is the direct descendent of the 861, with nominal differences, and Speedsmasters power by the 1861 are currently being used on the International Space Station for EVA (extravehicular activity), also known as space walks. 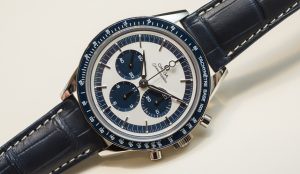 As far as Omega Speedmaster’s go, you’d be hard to find a better option than the limited edition CK2998, we’ve just taken one of these beautiful watches into stock, you can find out more about it here.

Famous manual-winding chronograph movement that was worn on the Moon. Rhodium-plated finish.

The History of the Rolex Milgauss