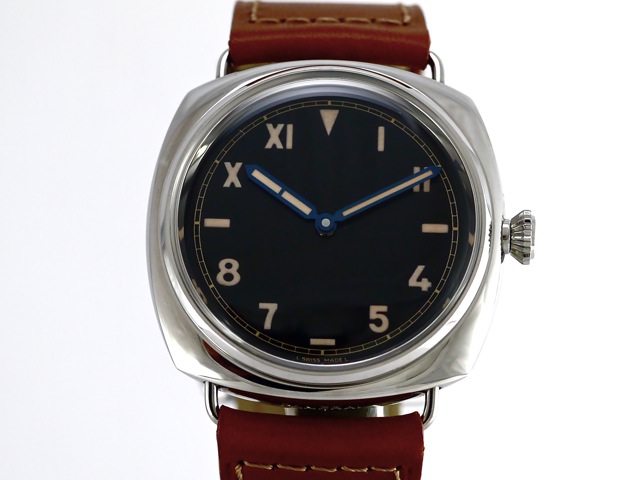 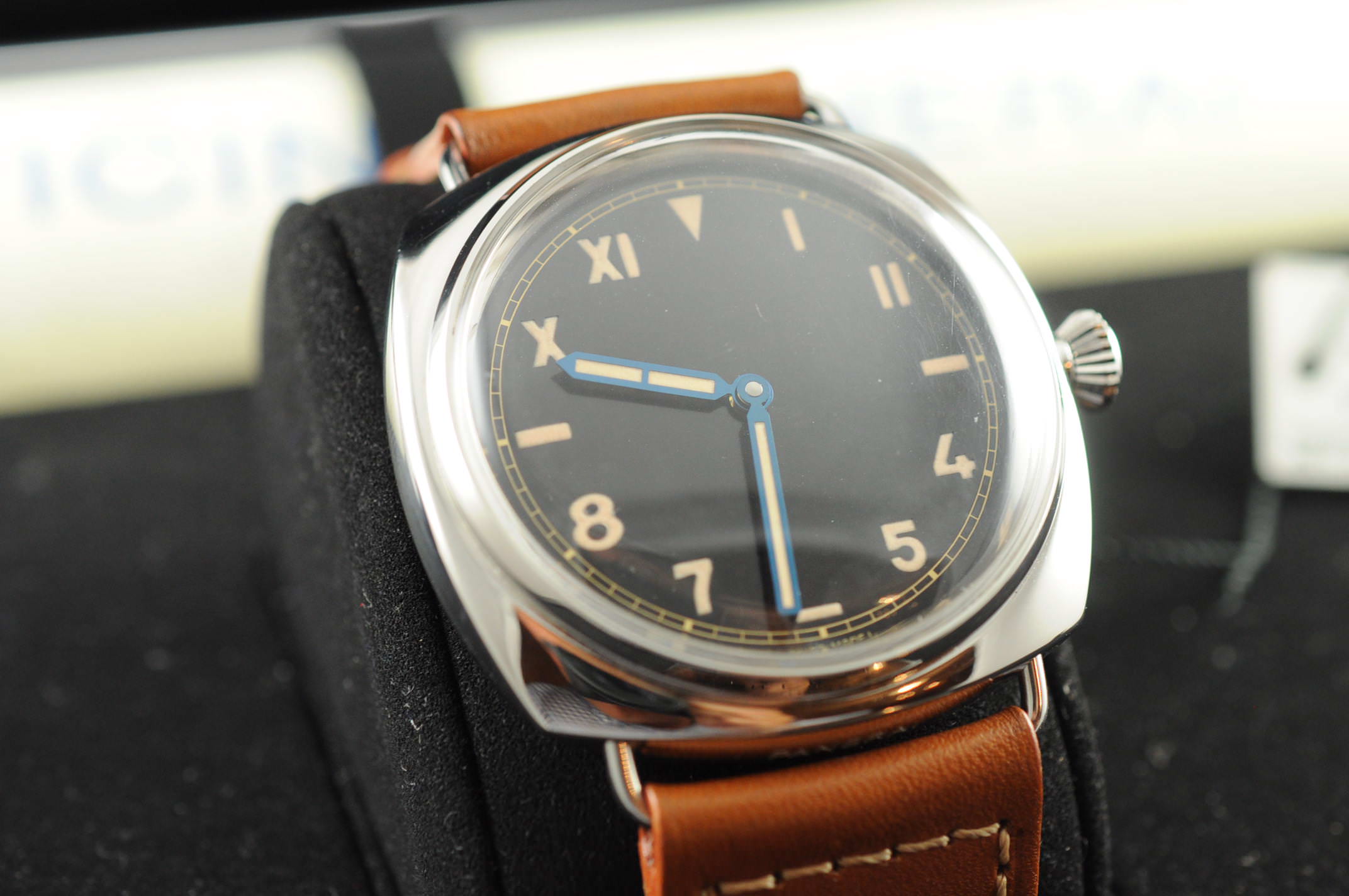 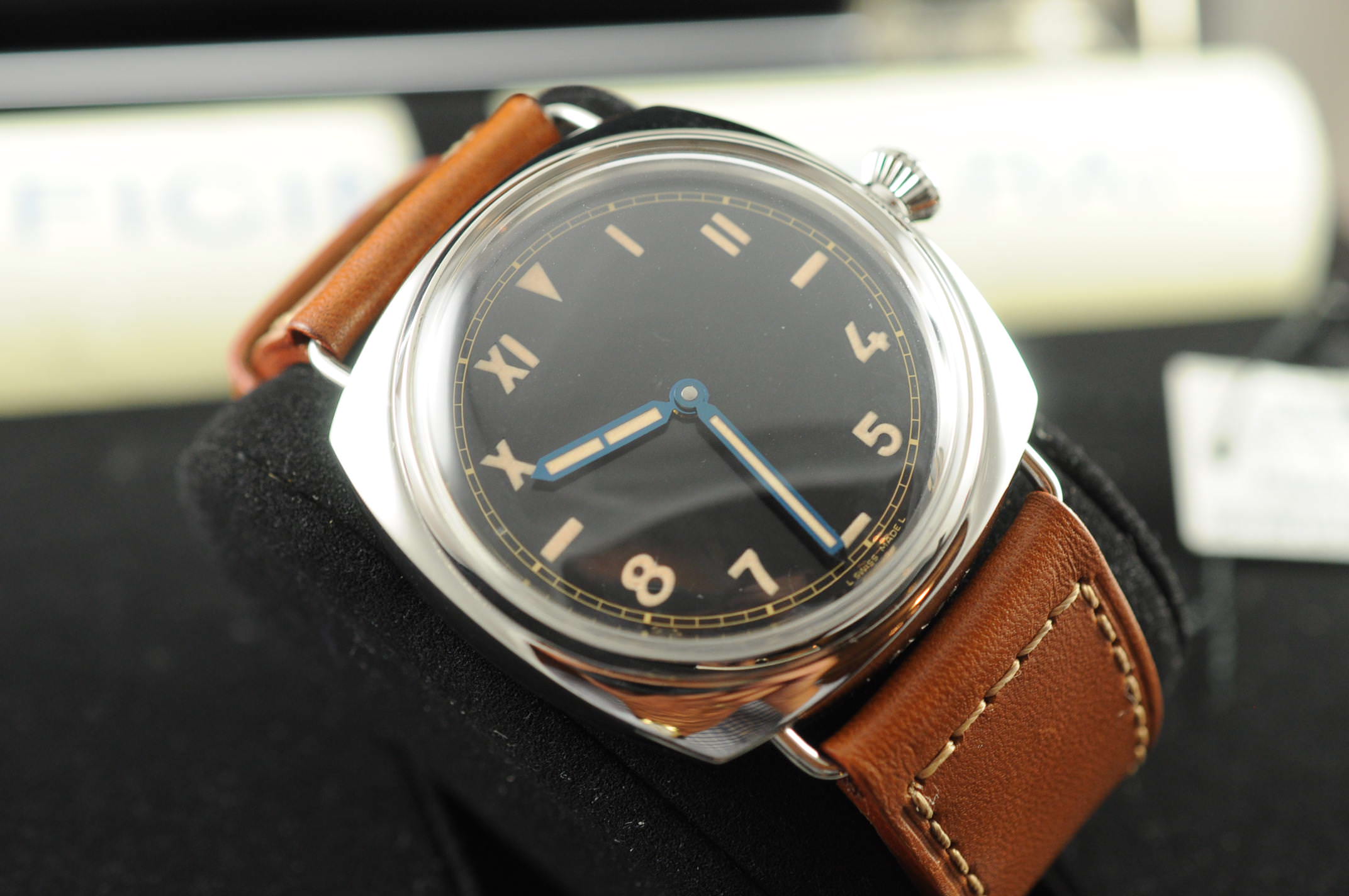 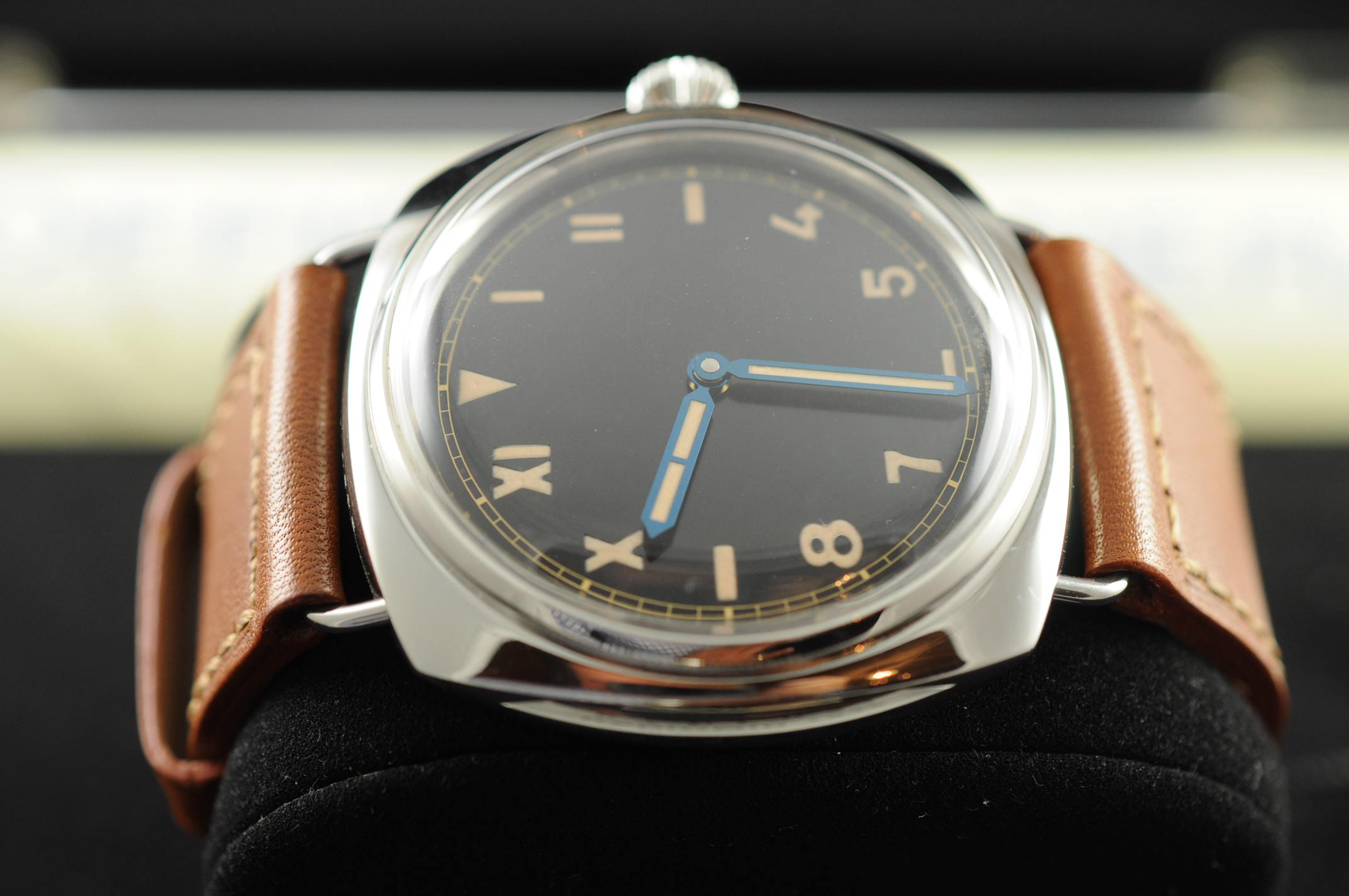 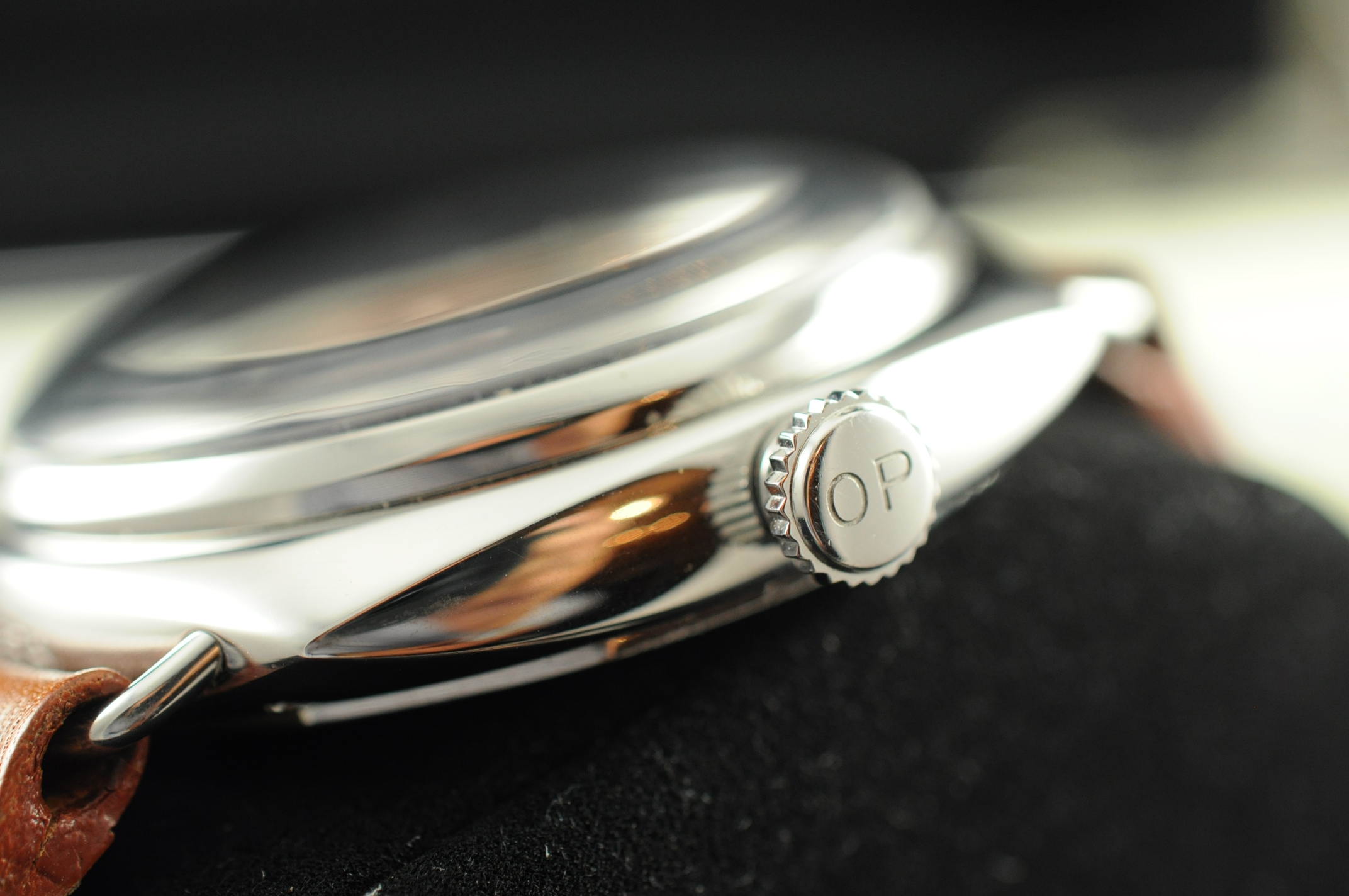 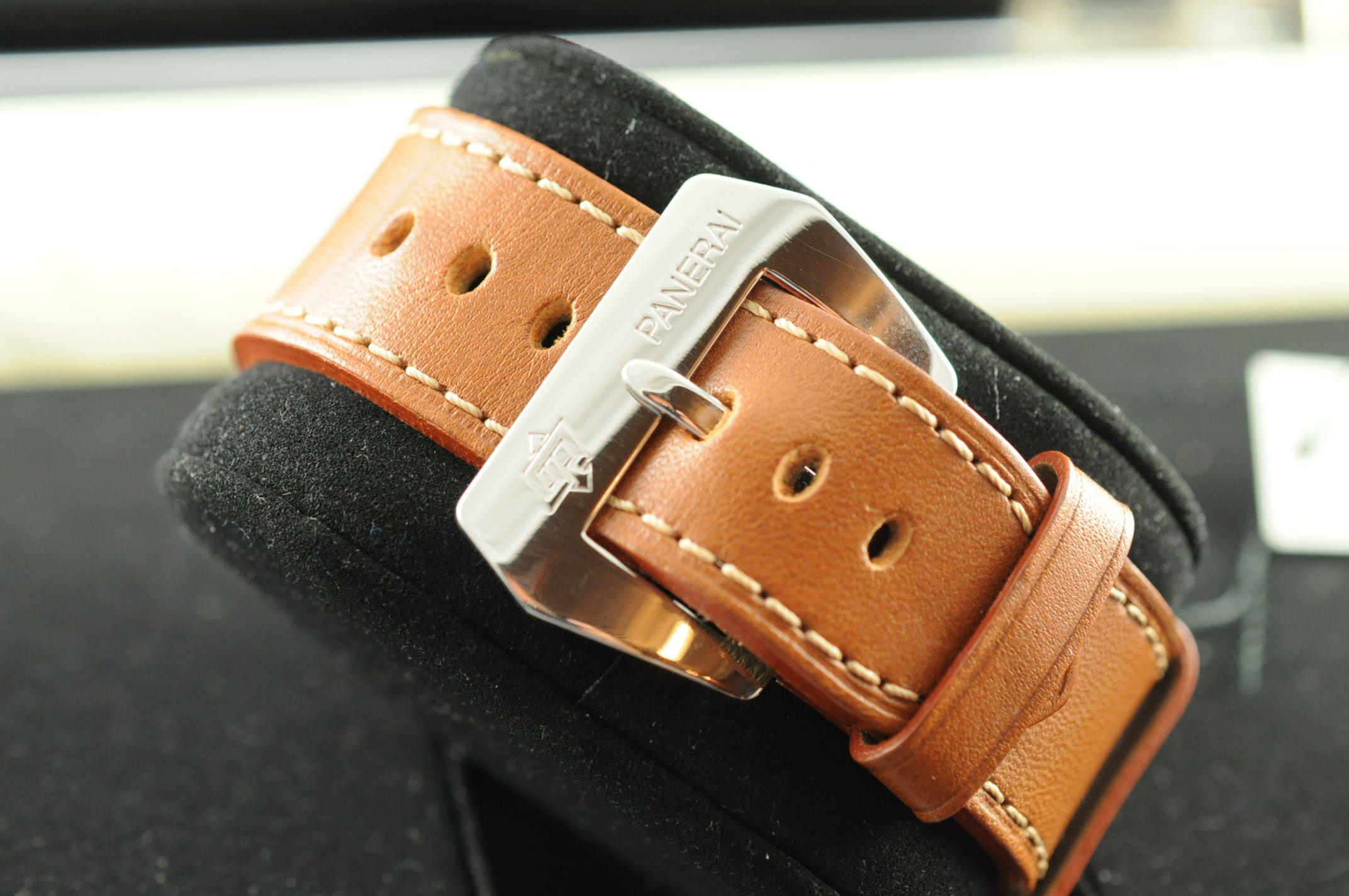 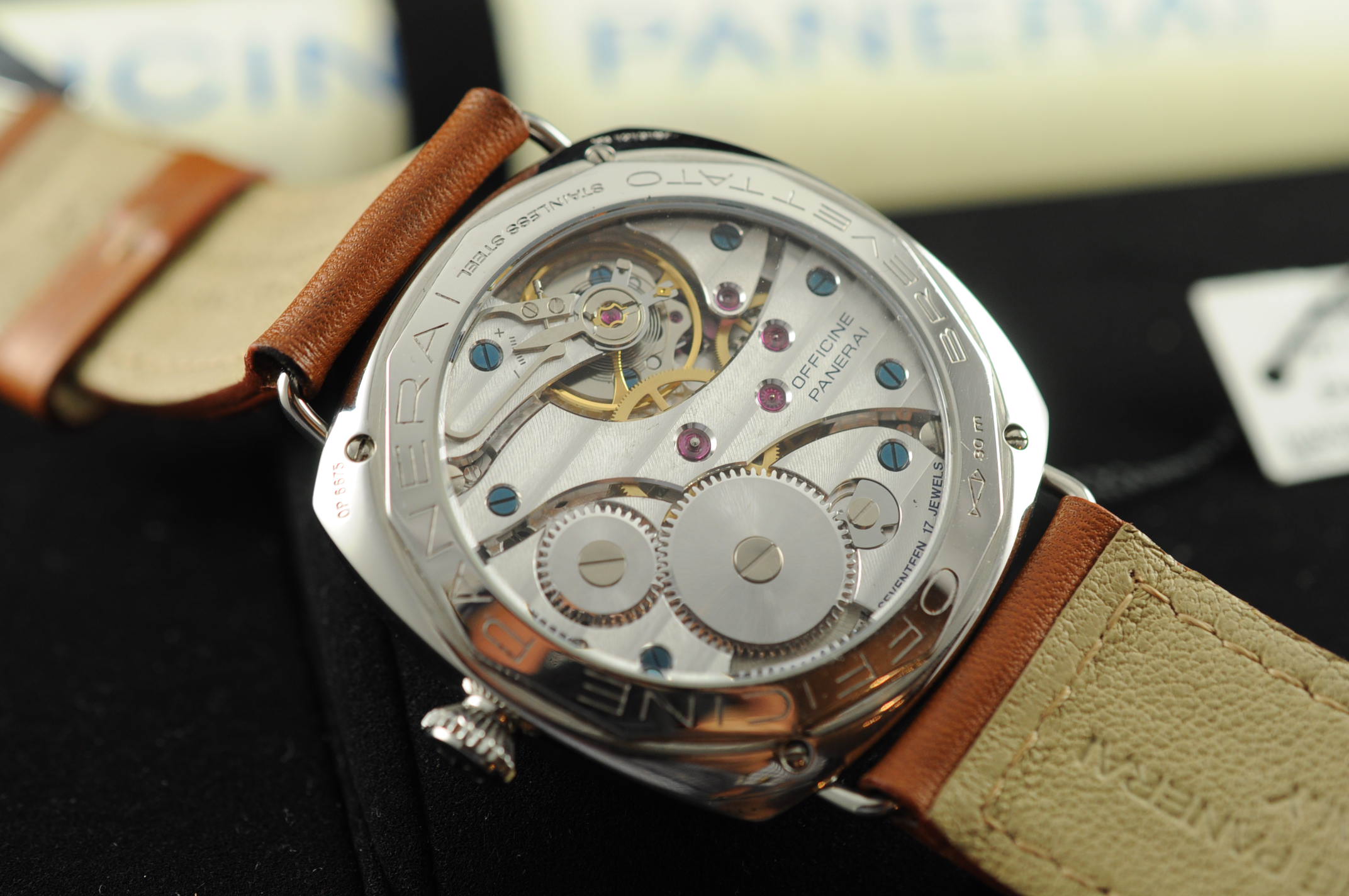 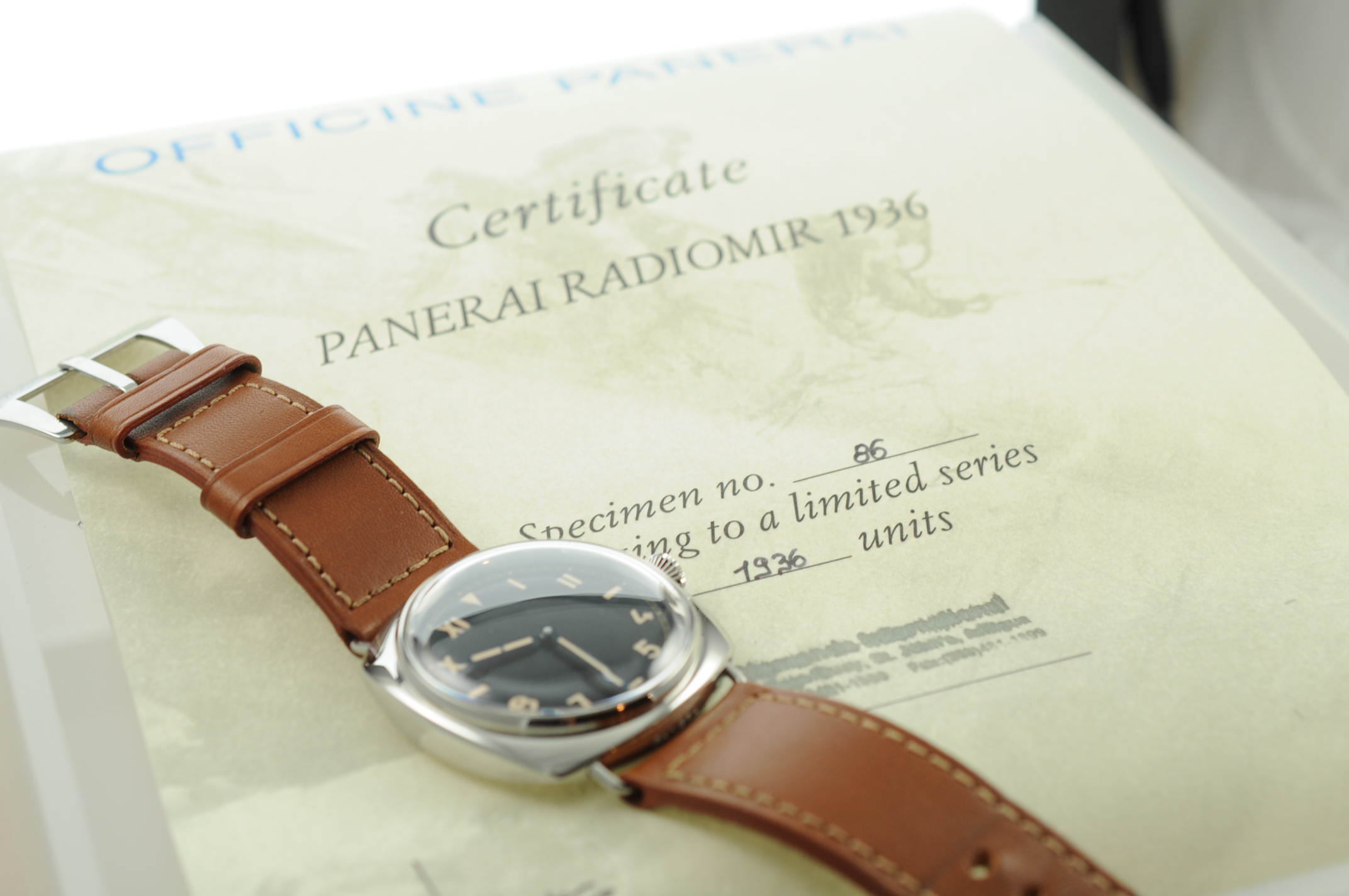 Bought new in 2007 this is a perfect limited edition example for the collector and is one of only 1936 made.

We share a few words courtesy of The Watch Observer describing this magnificent timepiece.

The Radiomir California is a watch that sets itself apart from the rest in the sense that it is a quasi-perfect replica of a vintage piece.
Indeed, the 2006 PAM 249 is the spitting image of the first Radiomir created by Officine Panerai at the end of the 1930’s.

At that time, Panerai wasn’t a brand name for luxury watches, but rather a small manufacturing workshop specializing in precision mechanics and essentially working for the Italian navy.

Far removed from the modern marketing and manufacturing preoccupations that affect all of today’s watchmakers, the Officine of the 1930’s bought cases in the shape of cushions, and the movements from Rolex.
It would then equip its watches with luminescent dials that were made in-house.

Radiomir and Luminor, the names of the two modern series from Panerai, were initially the names of the two luminescent pastes created by the Officine.
For the record, the Radiomir which was made with Radium, was progressively abandoned because of the adverse effects it was having on the health of the workers in charge of painting the dials…

A rather unique element for a modern luxury watch is its dial that is completely free of ay inscriptions, including the brand name.

The Radiomir which were the first water-resistant and luminescent watches on the market, were at the time reserved for the divers of the Italian navy in charge of sinking Allied boats in the harbors of the Mediterranean.

While identical in looks with its military elder, the 2006 PAM 249 is of course substantially different with its modernized design.
The wire loop strap attachments are no longer soldered on the case, but screwed in instead, making it easier to change straps, something the Paneristi fans are fond of.

Similarly, the Rolex movement (on a Cortebert basis) has been replaced by a classic Unitas…
Let’s note nevertheless that the bridges on the Unitas “OP X” have been redesigned to look more like the original ones on the Cortebert.

The overall finish on the movement is clean but still very industrial-looking, such as the acid-blued screws that we would have preferred to be flame-blued…

Among the vintage characteristics preserved from its older sibling, the PAM 249 has of course kept the California dial.
It’s distinctive feature is its Roman numerals from 9 to 3 o’clock, and its Arabic numerals  from 3 to 9 o’clock.
The origin of this design is rather nebulous. It was evidently first used by Rolex on some pocket watches before it was taken over again by Panerai.

The finish on this Panerai 249’s dial is excellent.

It is the first time that the Firenze company is using a Luminova with an off-white color reminiscent of the color of tritium patinated by time.

Another element that is rather unique for a modern luxury watch is its dial that is completely free of ay inscriptions, including the brand name.
It’s a little wink to its military predecessors that were “anonymous” so that they could not be used to identify their owners or their allegiance to one side or another.
Of course, the PAM 249 is not totally anonymous: the Panerai brand name is engraved on the case at 6 o’clock (between the wire loop strap attachments).

The last characteristics that ultimately proves Panerai‘s success in their quest to give this watch a vintage look is the convex glass which is not made out of sapphire, but plexiglas, the old fashion way!

It’s a very judicious choice because the plexiglas – which is very prone to micro-scratches – helps give the watch a patinated and authentic look completely in harmony with the overall spirit of the watch.

This should not in any way slow you down in your possible arduous activities because nothing is easier than re-polishing plexiglas to make it look sparkling new again – it can even be done with plain toothpaste.

Finally, the 47mm diameter of the watch (not including the crown) actually feels fine on the wrist, thanks to the cushion-shaped case and its reasonable thickness.
This is an imposing watch, but not massive, and it can easily go unnoticed.