During the first world war keeping information from the enemy was imperative, at the time espionage was rife and information passed across countries could contain top secret tactical information, which, if intercepted would have decided the fate of the war.

After the first world war, the Germans invented The Enigma machine. This machine (of which several varying types were produced) resembled a typewriter. It had a lamp board above the keys with a lamp for each letter. The operator pressed the key for the plaintext letter of the message and the enciphered letter lit up on the lamp board. The machine contained a series of interchangeable rotors, which rotated every time a key was pressed to keep the cipher changing continuously. This was combined with a plug board on the front of the machine where pairs of letters were transposed, these two systems combined offered 159 million million million possible settings to choose from, which the Germans believed made Enigma unbreakable.

Dilly Knox, one of the former British World War One Codebreakers, was convinced he could break the system and set up an Enigma Research Section, comprising himself and Tony Kendrick, later joined by Peter Twinn, Alan Turing and Gordon Welchman. They worked in the stable yard at Bletchley Park and that is where the first wartime Enigma messages were broken in January 1940. Enigma traffic continued to be broken routinely at Bletchley Park for the remainder of the war.

In 2013, Bremont Watch Company and the Bletchley Park Trust announced that they would be working together on the release of the Bremont limited edition watch that would incorporate historical artefacts from Bletchley Park. It was called the ‘Codebreaker.’ The watch is unlike any other watch ever created and in addition a percentage of the proceeds went towards the ongoing restoration of Bletchley Park.

This Fly back automatic chronograph has a wonderful war time history that is literally built into the manufacture of the watch.

The Codebreaker is styled after 1940’s officers watch and looks fantastic. The Codebreaker is Bremont’s first fly back chronograph, offering a two-register display and a 24-hour GMT hand with a matched scale on the rehaut. Powered by the fully decorated Bremont BE-83AR, the Codebreaker’s movement has 39 jewels and a power reserve of 46 hours. As a brand deeply invested in aviation and military connections, it is great that Bremont now has a fly back chronograph, allowing a single button to stop, reset and start the chronograph.

The Codebreaker, like most Bremont watches, measures 43mm wide and can be had in hardened steel or rose gold. Exhibiting a charming mix of signature Bremont style and vintage military elements, the Codebreaker looks fantastic, with excellent legibility and a distinctive dial layout. The Codebreaker incorporates two small sub dials, placed low on the main dial, that offer running seconds and a 30-minute display for the chronograph. The GMT display uses a full-sized hand with a red arrowhead pointer that references a simple 24-hour scale placed outside the railroad minute track on the outer edge of the dial.

There is a date display at six and a balanced use of Arabic numerals to complete the military aesthetic. 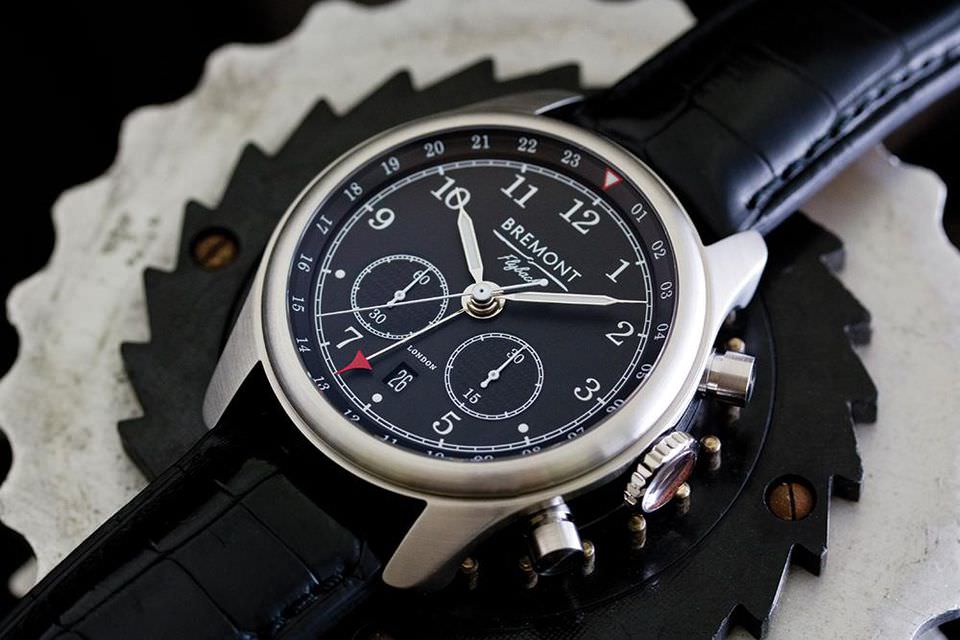 We’re always on the lookout for rare and exciting timepieces, we think the Bremont Codebreaker is one of the coolest watches out there and if we get another opportunity to bring one into stock, we will, however it might be unlikely as there is only 240 in the world in hardened stainless steel and only 50 in rose gold.

To date, Edinburgh Watch Company have sold two of these incredibly rare and highly desirable timepieces. Our most recent example went to a gentleman whom once worked in Bletchley park and was delighted to find the exact watch here in Scotland. We were delighted to see the excitement on his face when trying on the very watch he’d been after for many years however had been unable to source. We are very pleased to share some photos from Jim at Bletchley Park along with his wonderful testimonial following his dream purchase from EWC.

The Codebreaker now on the wrist of it’s new custodian

“I had been looking for a Bremont Codebreaker limited edition for some time, and came across one completely by surprise at the Perthshire Classic Car Festival, in April 2018, where the Edinburgh Watch Company had a trade stand with one of these watches on display. I already knew much of the history and special features of this watch, and I was pleasantly suprised that Company owner Jonathan Gilbert had also researched this timepiece thoroughly, sharing his knowledge and the provenance of this particular piece. This limited edition timepiece celebrates the work of Bletchley Park during WW2 in breaking the German Enigma Code. I too worked occasionally at Bletchley Park in the 1980’s and early 1990’s, when it was owned by British Telecom. My own career included work on cypher and coding systems in use by our armed forces in the 1980’s, so my association with this place was epitomised in this watch. Jonathan made me feel confident that I was dealing with a reputable company, and with someone I could trust. My follow-up meeting to collect the complete watch, presentation wallet and boxes, associated papers and certificates, was not just a handover, more an exchange of experiences of our world of watches, and other common interests. Though my collection is modest Jonathan knew the history of some of my timepieces. It is amazing what you find in common when you meet this man. I would not hesitate in buying another timepiece from this company, or recommending them. You too will receive the special attention that makes buying that special watch an experience, not just a purchase. The photos added are from a recent visit to Bletchley Park, to some of the places I had worked and relaxed, and the equipment that is recreated in the Bremont Codebreaker” – Jim Paterson