For well over 50 years, the Omega Speedmaster has witnessed events that have tested the limits of physical endurance and human courage, including the first manned lunar landing in July of 1969 and every single one of NASA’s piloted missions since March of 1965. 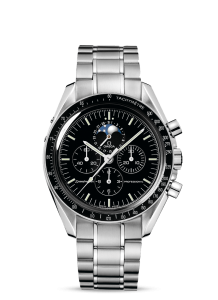 The Omega Speedmaster Professional Chronograph has a unique place in the history of space exploration as the only piece of equipment used in all of NASA’s piloted space missions from Gemini to the current International Space Station program. When Buzz Aldrin stepped on the lunar surface in 1969, he was wearing a Speedmaster Professional, the chronograph that has been known as the Moonwatch ever since.

With its black dial and tachymeter scale, this 42 mm chronograph was designed to stand out. The indexes and central hour and minute hands are coated in Super-LumiNova. A hesalite crystal protects the dial enhanced with a 30-minute recorder, 12-hour recorder and small seconds sub-dial. The stainless steel case is presented on a matching bracelet or a black leather strap.

President John F. Kennedy’s challenge to send an astronaut on the Moon was particularly audacious considering that when he first voiced it, only one American had been in space for a grand total of 15 minutes and 28 seconds. When Buzz Aldrin stepped onto the lunar surface in July of 1969, the Omega Speedmaster Professional earned its distinctive nickname, The Moonwatch.

“Since its introduction in 1957, the Speedmaster has been characterized by its precision, readability and robustness”

Since its introduction in 1957, the Speedmaster has been characterized by its precision, readability and robustness. Until 1968 it was powered by the calibre 321 which was later changed to calibre 861. This was replaced with an enhanced version when Omega introduced a high-grade rhodium-plated finish on the movement, resulting in calibre 1861 and the more embellished 1863, both of which are hand-wound. Today, the timepiece is powered by virtually the same hand-wound movement that powered the timepieces NASA’s astronauts wore on the Moon.

Here at Edinburgh Watch Company we have just taken in a completely unworn and very stunning July 2017 example at a fraction of the new price. For more information please click here.

Manual-winding chronograph movement with rhodium-plated finish. Based on the famous caliber 1861 with additional moonphase and date indicator.