Here at Edinburgh Watch Company, given the opportunity, we’re all about finding the most interesting and special timepieces, and this week is no different.

We find the majority of our customers are mostly interested in Rolex, however this doesn’t mean that any other brands should be overlooked.

In stock now we have two very special timepieces, both Swiss made and with precious metals, one from Hublot and the other from Audemars Piguet.

Starting the business as an independent family company just a few decades ago, Hublot quickly entered the world of high-end luxury watchmakers, led by the vision of its founder, the Italian manufacturer, Carlo Crocco. What started in 1980 as the single-watch concept that for the first time brought together a precious material and rubber, turned out to be a true revolution in the design of luxury timepieces. 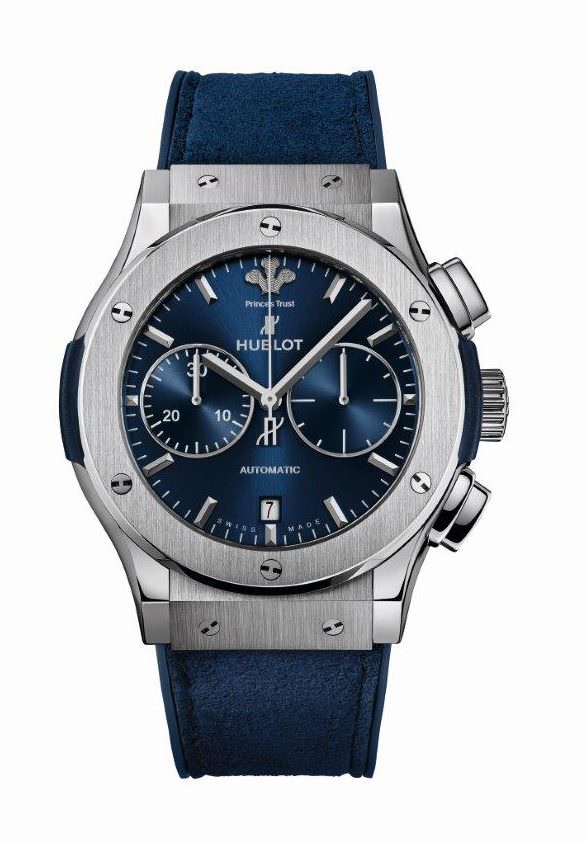 To mark the occasion of more than 40 years of supporting disadvantaged young people in the United Kingdom, Hublot has partnered with The Prince’s Trust to create a Special Edition charity timepiece the ‘Classic Fusion Chronograph Prince’s Trust’.

Hublot revealed the new limited edition timepiece the ‘Classic Fusion Chronograph Prince’s Trust’  in 2017 inside the iconic Orangery, within the grounds of Kensington Palace.

This watch is a distinctive yet understated collectors timepiece featuring a 45mm case in polished and satin-finished titanium and blue sun-ray satin finished chronograph dial powered by the self-winding movement featuring a 42 hour power reserve.  The on-trend blue theme continues with the rubber and Alcantara strap.  The timepiece is completed by The Prince’s Trust logo shown at 12 o’clock.

Hublot has limited this timepiece to just 100 pieces available exclusively in the United Kingdom, with a portion of proceeds from the sale of each one going directly to the Prince’s Trust charity.

This particular watch we have in stock is in mint condition, comes with a full set of box and papers, has only been worn a handful of times. And comes with a significant saving off list price 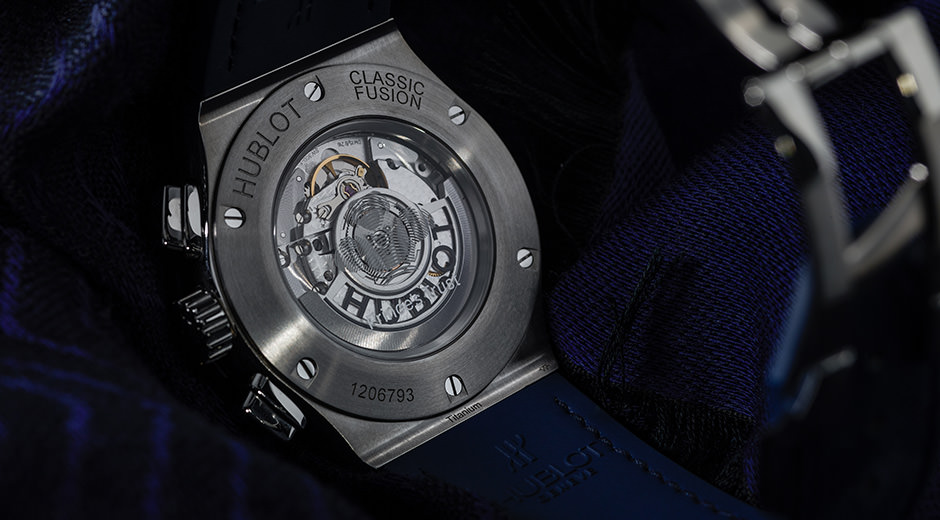 The other special timepiece we have in stock at the moment is an unworn Audemars Piguet Royal Oak Offshore.

If watchmaking has an equivalent of Lennon and McCartney, it may be Jules Louis Audemars and Edward Auguste Piguet.

The respected Swiss craftsmen from the Vallée de Joux were in their early twenties when they first met in 1874, founding their company a year later with the intention of creating some of the world’s finest timepieces, equipped with complicated mechanisms.

Audemars would produce the raw components for the timepieces, while Piguet was a repasseur (a master watchmaker who performs the final regulation on a watch).

The Pair had a vision and a desire to do things a little differently, which has led to numerous technical innovations over the past 138 years.

Based in the village of Le Brassus where their headquarters are still located, Audemars Piguet produced some of the world’s most complicated pieces before the beginning of the twentieth century, including many world firsts. In 1892, they produced the first minute repeater wristwatch (a complication popular before artificial illumination that audibly ‘chimes’ the time down to the nearest minute at the press of a button).

In 1921 — at around the time they were producing luxury pieces rebranded for Tiffany & Co, Cartier, and Bvlgari — Audemars Piguet produced the first jumping hour watch (where the hour hand “jumps” to the next hour, rather than moving progressively). Four years later, they revealed the world’s thinnest pocket watch calibre, at just 1.32mm.

They developed the first skeleton watch in 1934, allowing all the intricate moving parts of the calibre to be seen beneath the dial. It’s a novelty that has been heavily imitated, but still mastered by Audemars Piguet today.

After producing the world’s thinnest watch in 1946 and their first wristwatch with a perpetual calendar in 1957, they launched one of the most iconic watch designs of all time in 1972: the Royal Oak.

Named after the tree that famously protected King Charles II from the Roundheads (and subsequently used as the name of eight separate Royal Navy Warships), the Royal Oak embraces Audemars Piguet’s unique mentality, as it was the first stainless steel high-end watch in an era when luxury pieces were generally only gold. Today, the collection is instantly recognisable, and aesthetically characterised by its Guilloché dial and octagonal bezel, secured with oversize screws.

In 1993, Audemars Piguet introduced a new sportier iteration of the collection, The Royal Oak Offshore. With a generous 42mm case, it was the world’s first oversized watch. It typically features up to 300m water resistance, anti-magnetic protection and rugged materials like carbon, rubber and scratch-resistant sapphire crystal glass.

This model belongs to the newly relaunched Royal Offshore collection and is a show-stopper piece in stainless steel with a black dial and black ‘hornback’ alligator leather strap.

The movement includes a ‘Monobloc’ oscillating weight in 22-carat gold and contains 59 jewels. This men’s watch is a real treat for any Audemars Piguet enthusiast, an excellent addition to the brand’s popular collection and perfect for those wanting to remain ahead of the trend. The addition of red stitching on the strap as well as the chronograph hands on the dial of this bold timepiece compliment a sporty, dynamic personality.

Bought new in 2017 from a UK dealer this striking watch has never been worn and was part of a private collection.

We are pleased to offer this with a substantial saving of £4905 off RRP and available now.

It comes as a full set and then balance of the AP warranty.

It is fitted on a leather strap and we have an unworn rubber strap as an option to buy too.

If you would like to see these in person, please get in touch. 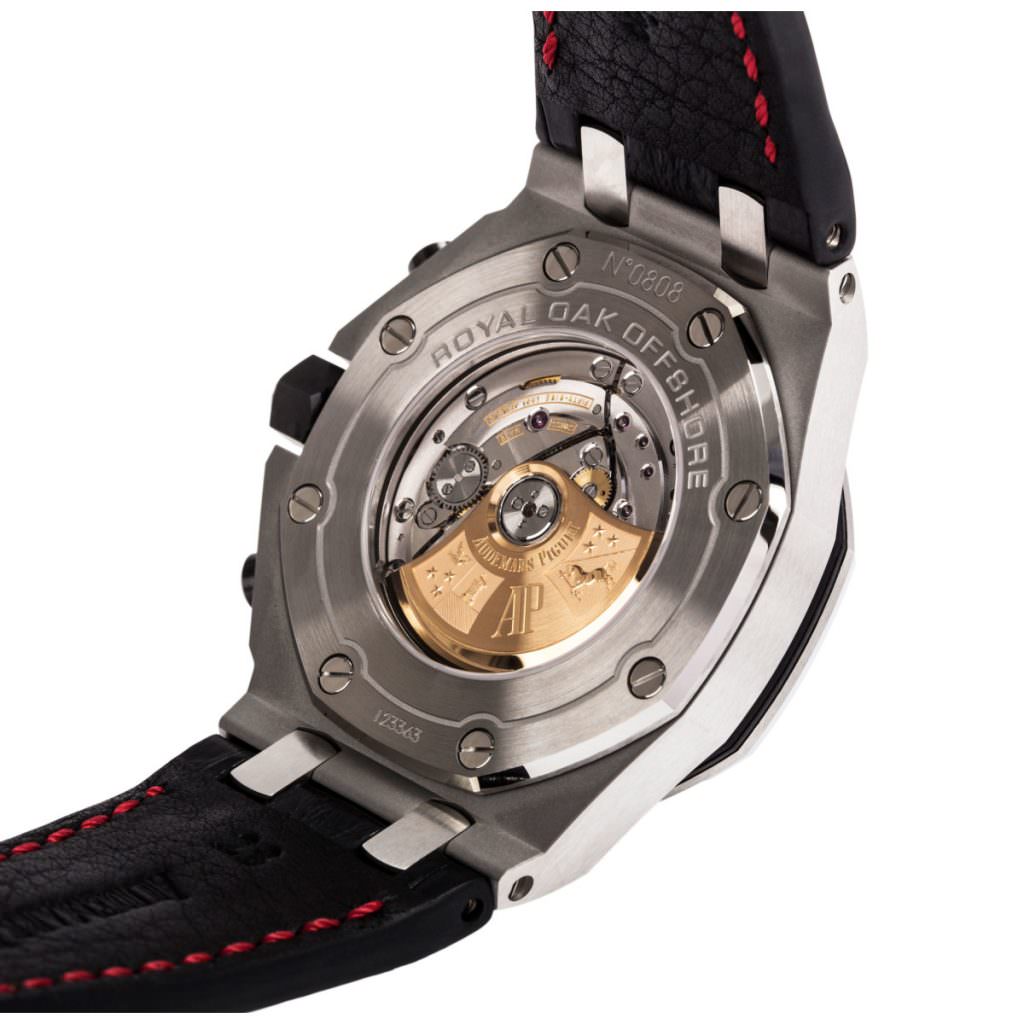 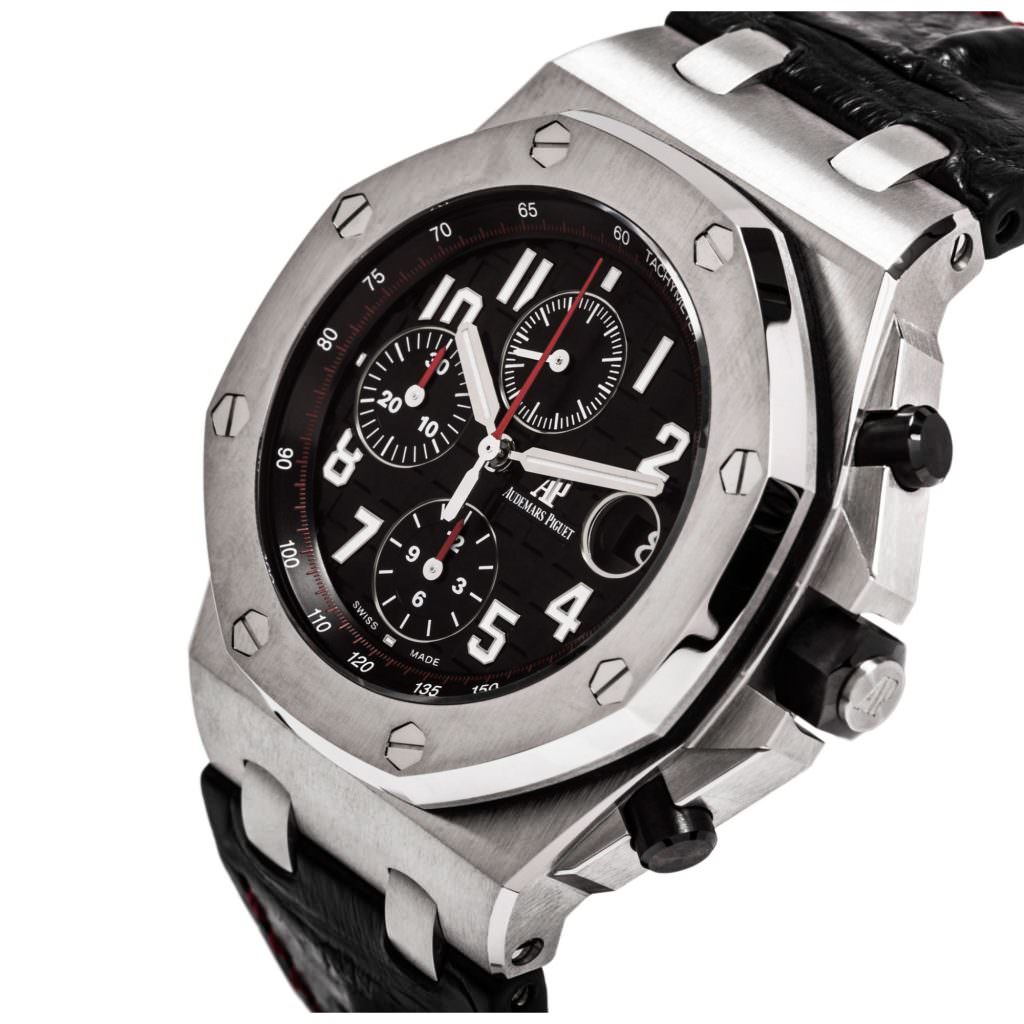 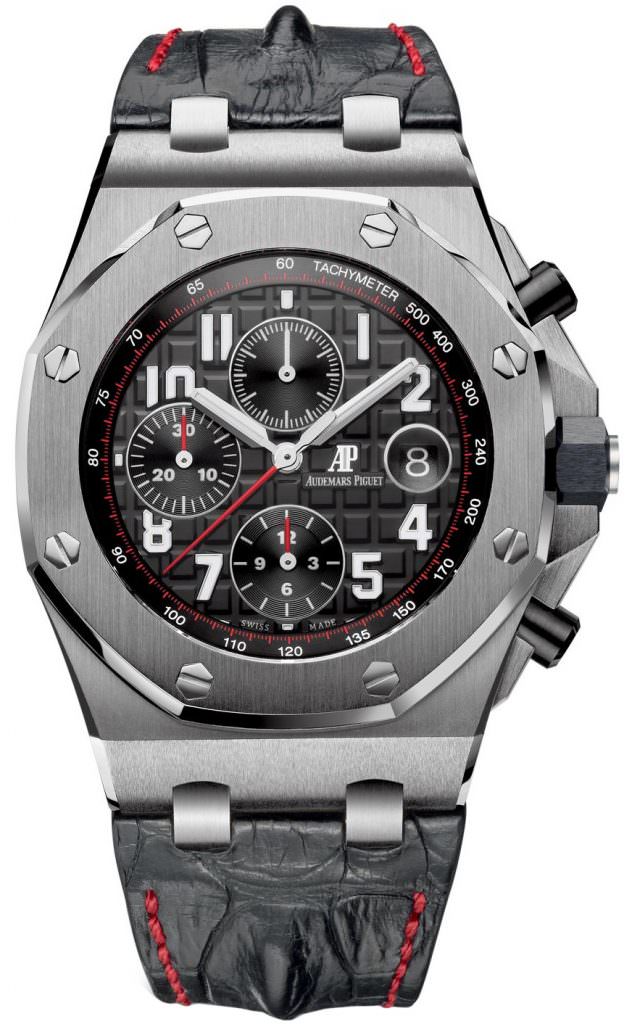