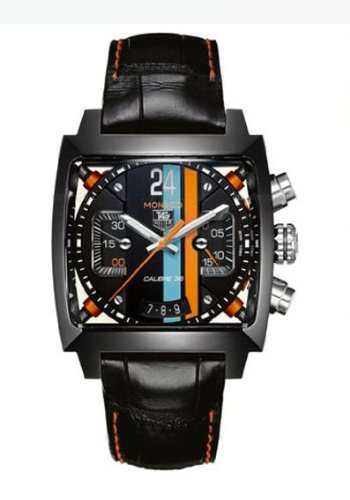 • We’ll let the pictures do the speaking on this beautiful Monaco!
• Save over £3755.00 off RRP
• Very collectible 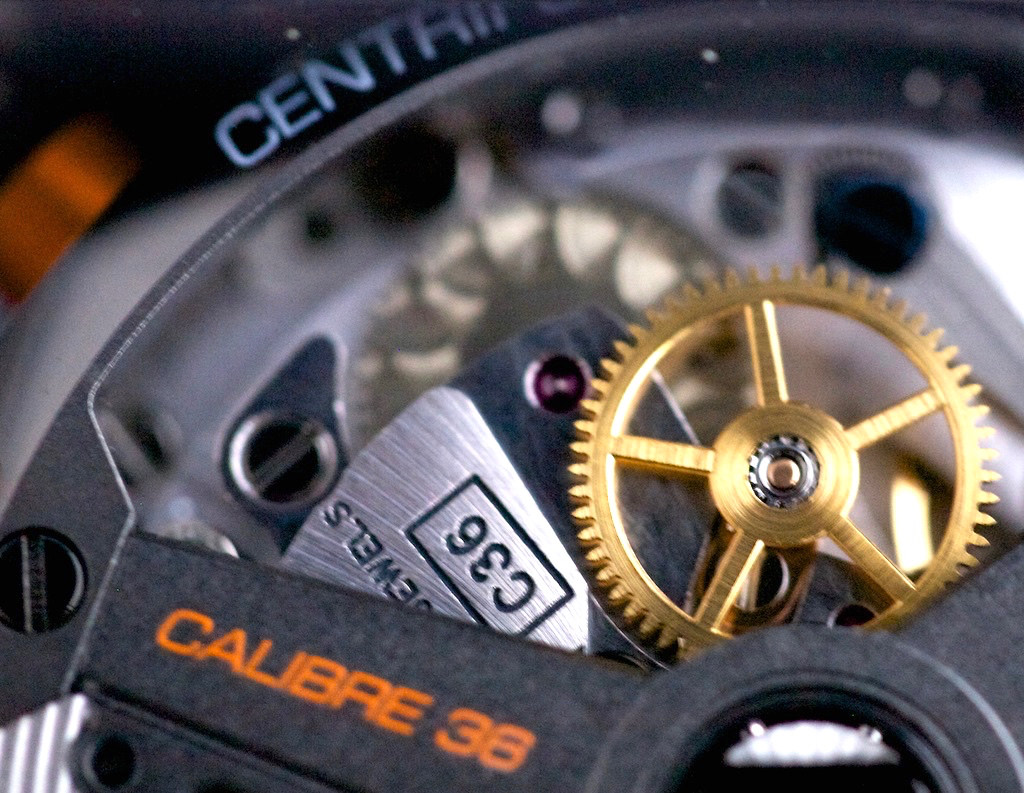 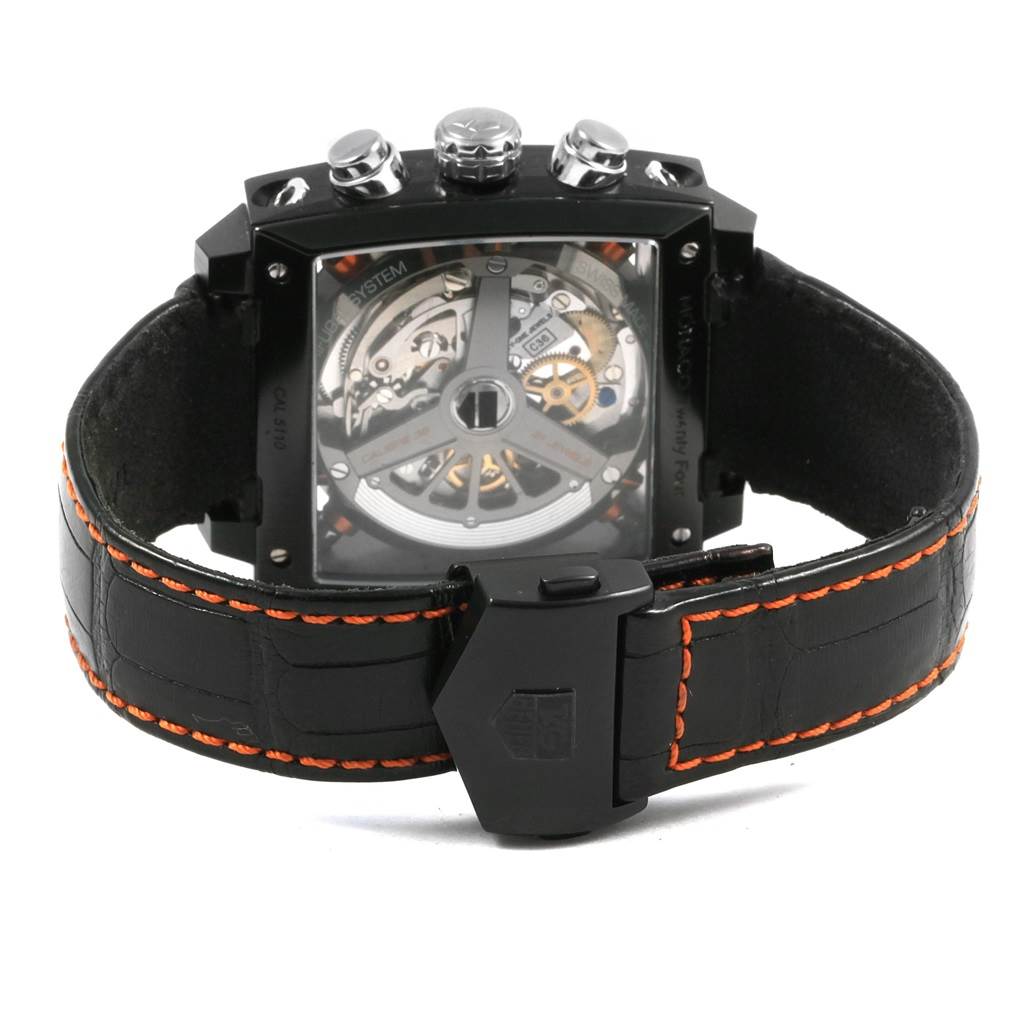 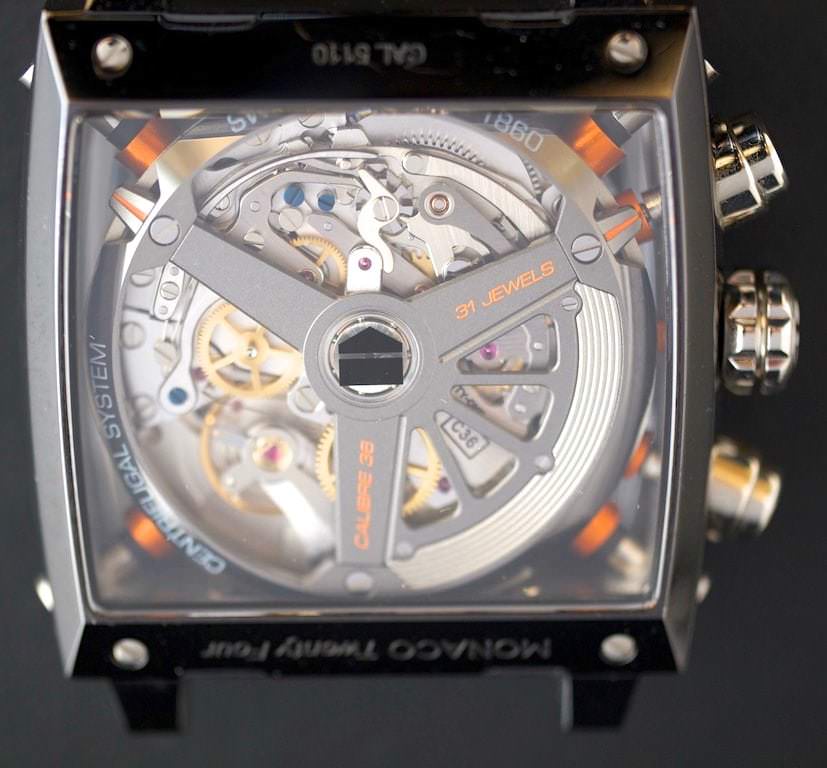 We have just bought this striking and very collectible 2012 Tag Heuer Monaco Gulf Twenty Four. This is an extremely rare watch and boasts a variation of the Zenith El Primero based Calibre 36 movement.

The Monaco Twenty Four Concept is an iteration in a series of “special” Monaco watches, and was first presented during BaselWorld 2009.
This rather futuristic Monaco Concept results of the assembling of more or less obvious references to GT racing, both in design and manufacturing.

The most impressive feature is the movement being “suspended” within the case.
It almost floats on four arms having a ‘composite shock absorber’ (according to TAG Heuer).

According to an announcement by Jean-Christophe Babin, president of TAG Heuer, the watch is also named after the fact that it can withstand an impact of 24,000G,which is an equivalent to a 20 meter fall.

The first thing that you notice about the Monaco 24 is the bright orange and blue stripe that run from the top to the bottom of the dial, paying tribute to the colours of the Gulf Porsche 917 driven by Steve McQueen in the movie Le Mans .

The case itself is black, due to its The titanium carbide coating. Unlike a traditional matte PVD coating, the Monaco 24 has a highly polished case

The two sub-dials are recessed from the main dial and seem to be cut in half. Both have double-sided hands, with the orange hand indicating the first “half” of a timing event (e.g. 0-30 seconds on the left-hand sub-dial) and the silver end the second “half” (30-60 seconds).

The shock-absorber system is designed to protect the movement in its entirety, not just its regulating components as a conventional Incabloc shock protection system does. These are finished in matching orange and without a doubt are the highlight of the watch, as they allow the dial and movement to “float” inside the case.

The Twenty Four Concept complements its technical features with a few aesthetic references to the automobile racing world: a hulking “24” at 12 o’clock on the dial (as an homage to the 24 Heures du Mans racing), “blue/orange” stripes (just like on Steve McQueen’s “Gulf” Porsche in the film “Le Mans”)…

Another feature is the Calibre 36 Movement… nothing less than the famous Zenith El Primero.

This world-acclaimed movement, is the only chronograph movement beating at 36,000 beats per hour, which gives it an amazing accuracy, together with the possibility of tenth-seconds measuring. 31 Jewels

The adornment and design conducted by TAG Heuer have been very neatly manufactured.

They’re visible through a very wide and pleasant sapphire crystal caseback, with its GT mag-shaped, rim-like oscillating weight and orange colors, although we’re still in an industrial finishing process here.

The Monaco 24 is powered by the Calibre 36 movement (El Primero), regarded as one of the finest Chronograph movements on the planet. In order to allow maximum visibility of this beautiful movement, TAG Heuer have replaced the standard oscillating weight with an innovative 3-spoke design. TAG Heuer claim that the centrifugal system is another innovation of the design,

a watch movement has never looked so good as it does inside the Monaco 24, with the shock-absorbers perfectly framing the movement and allowing excellent viewing of the movement’s inner-workings.

It comes complete with all of it’s original boxes, chronometer card and warranty card.

When new that were circa £10250.00 We have this unworn piece very attractively priced.