The Rolex GMT Master BLNR affectionately known as “The Batman” is one of the most desirable models in the Rolex sport watch collection.

Such is its desirability anyone wanting one has a likely two or three year wait from their local AD or instead can shortcut that by buying one from specialists like ourselves.

It’s stainless steel case, dual time function and striking blue black colour scheme creates a unique and handsome look on the wrist and was the watch of choice to wear while competing in the Scottish round of the British Touring Car Championship(BTCC) by Aiden Moffat in his Infiniti Q50 race car.

The BTCC is the most popular UK racing championship with thousands of fans watching their motorsport heroes fighting it out on track across the UK in their BMW’s, Audi’s, Vauxhall’s, Ford’s etc. 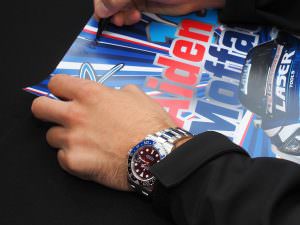 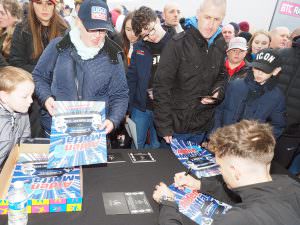 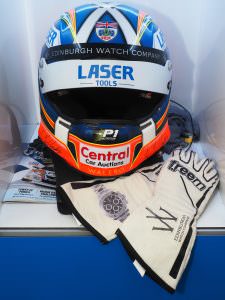 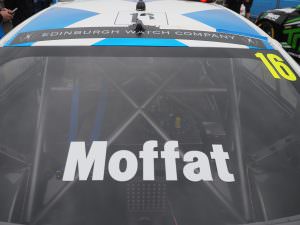 Aiden Moffat is home grown talent who started his career in 2010 racing bangers in Lochgelly as a teenager where he told us a car cost about £90 to get on track which is a great contrast to the £250,000 Laser Line Racing Infiniti Q50 he races today.

Having succeeded at banger racing Aiden’s progression took him to where he raced last weekend at the Fife Knockhill Racing Circuit. His carefully honed skills paid dividends as winning became a familiar result as Aiden won the Fiesta ST championship among others.

Racing for Aiden is a family sport where his passion is mirrored by that of his father Bob and for all members of the family and his dedicated racing team. At a young age of twenty two he has already had three podium finishes including a win at Donington when driving his Mercedes last year. He has since switched from the Mercedes to the rear wheel drive Infiniti Q50 where I have every confidence his talent, radiant personality and a great team will guarantee Aiden a successful motorsport career. You can learn more about Aiden’s career here

For those of you who have followed life at EWC you will know our passion is shared between watches and cars and we have enjoyed supporting various drivers competing in Porsche, Mini, VW and Formula Ford championships over the last few years. There is a great synergy for us between luxury watches and Motorsport where we are sponsors for Knockhill Racing and timing partners for the Scottish Motor Racing Club.

Last weekend (14/15th September) EWC were invited to sponsor Aiden for his Scottish round which simply felt a great idea to take the EWC brand into the BTCC but more importantly support another Scottish racing driver.

With a sponsorship deal agreed we met with Aiden up at Knockhill to see the car and interview him to find out more of his racing career, learn about the car and his interest in watches. You can see this here on our EWC Youtube channel.

To get the EWC brand out there Aiden agreed to display the EWC branding on his helmet and on the roof of the car. Having been nominated to have an in car camera for ITV4 this promised to give us some great coverage which was seen in the third race as Aiden gave a commentary for viewers to enjoy as he warmed the car and tyres up before the start.

We had a fresh pair of race gloves with EWC branding that fitted Aiden perfectly and all that was left was  to complete the look was some smart timing gear in the form of the Rolex GMT Master BLNR.  Aiden loved the fact that it matched his car and those of the Scotland flag. So the car and driver was ready for a very competitive weekend ahead on his local circuit.

The competition was tough with his close friend Rory Butcher who had literally grown up at Knockhill competing too. Rory was piloting the Honda Civic Type R and was another front runner alongside Aiden.

Saturday saw the BTCC cars undertake their official qualifying times that would determine their position for the start of race 1. Aiden’s first qualifying session gave him a P2 position which was really exciting for all involved. The car was performing really well despite having only had three races since being built by the Laser Tools Racing team. In qualifying sessions two and three Aiden dropped back a little as he was caught up in traffic and sadly did not get a good lap in. From my memory the top 8 cars were only a few tenths of. second of each other and that is what makes the BTCC so exciting as it is very very close racing.

Sunday was race day and the weather while cold in the morning was dry, which for Knockhill was a rare treat! Drivers and fans would enjoy three races during the afternoon supported by Formula Ford, Ginetta’s and Renault Clio Cup racing.

Each of the races were great to watch, we enjoyed a fantastic view and hospitality from the Laser Tools Racing team and Aiden’s drove impeccably in each race although I expect will have been disappointed not to have had a podium finish on his local circuit. Race three gave Aiden a top ten position which was still a good result and earned valuable points.  As I mentioned earlier the Infiniti Q50 is still very much under development and is competing with factory teams and very well sorted cars. Aiden’s friend Rory delighted fans with victory in race 1 and we offer Rory our congratulations.

As I write this post now and reflect back on the weekend it was a fantastic opportunity for us to be involved and play a small part in supporting Aiden who in turn was a perfect ambassador for EWC on and off the track.

The next BTCC round is at the F1 circuit Silverstone on the 28th/29th September and we wish Aiden and his team all the very best of luck for the remainder of the season.

Out thanks to MJP Media for these wonderful images of the weekend. 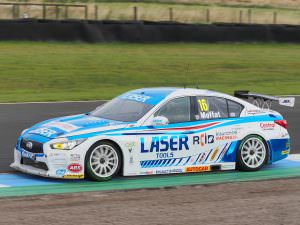 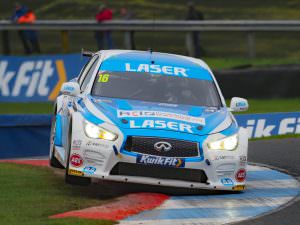 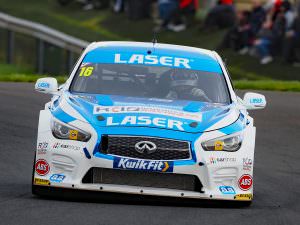 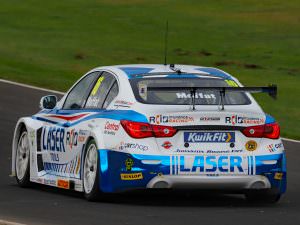